Consequences for Assisting Escape in Oklahoma 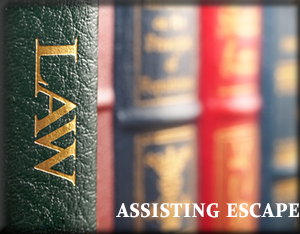 Assisting Escape is a Serious Crime in Oklahoma

Sometimes a loved one gets into trouble with the law. It can be tempting to help that person escape from the reaches of the law, but doing so can get you into real trouble. There are many circumstances in which we might be tempted to help a prisoner escape. This is particularly true if the person is a loved one or a close friend, or if we believe in that person’s innocence, or in the heat of the moment during a police arrest. However, if we can keep a cool head, sometimes we can find a better way to help that person.

The Law on Assisting Escape is Strict

Likewise, it is against the law in Oklahoma to provide any tools or aids to a prisoner to aid his or her escape. The image that may come to mind is the file baked into a birthday cake, but other tools might include a set of lock picks, a weapon, a hammer, a chisel, or any other implement that could be used in an assisting escape.

Any person who sends or brings anything into a prison that might be useful to help a prisoner escape, can be convicted. Again, if the prisoner was being held on a felony conviction, any aid you give him or her will subject you to a possible felony conviction, punishable by up to ten years in jail. If the prisoner was in custody for crimes other than a felony, you could still spend up to a year in jail, pay a fine of up to $500, or both. Okla. Stat. 21 § 438.

Assisting Escape During a Lawful Arrest

Another situation where it might be tempting to help someone escape is from an officer. But anyone who willfully helps a prisoner escape or attempt to escape from an officer or from a lawful arrest in Oklahoma can be convicted of a misdemeanor. This can happen when a couple of guys have had too much to drink or are under the influence of another intoxicating substance and one of the guys is being arrested for being disorderly in public. If his friend interferes with the arrest to try to help his friend flee, he could be arrested and convicted of a misdemeanor. Okla. Stat. 21 § 441. While a misdemeanor is not nearly as serious a charge as a felony, it can still mean up to a year in jail, a fine, or both.

Finally, in Oklahoma it is against the law to willfully gain unauthorized access to a jail or prison where prisoners are held. While we don’t often think about breaking or sneaking into a jail, that can often be a precursor to an escape attempt. You sneak in to help your buddy escape. Breaking into or sneaking into a jail or prison is a felony in Oklahoma, punishable by a jail term of from one to five years, a fine of up to $1,000, or both. Okla. Stat. 21 § 445.

The result is that aiding in the escape of a person from the law for any reason can result in jail time. It can be difficult to stand by and watch a friend arrested or jailed, and if you interfere in that process or help a friend escape, you will need the help of an experienced criminal defense attorney to help you protect your freedom.

Wirth Law Office is here to help when you need it most. We offer a free consultation with an experienced Tulsa criminal defense attorney to help you defend your legal rights.

Call 918-879-1681 for a free consultation or submit a question through this website.