Video Transcribed: What is medical parole in Oklahoma? I’m Tulsa attorney James Wirth, and we’re about to talk about compassionate relief medical parole. Oklahoma does have a special type of parole for those that are having health conditions.

And essentially it is eligible to people who are deemed no threat or no longer a threat to public safety or are dying or near dying. But the process to get such a parole is pretty convoluted and there are some exclusions. So the first exclusion is statutory. An Oklahoma law provides that anybody sentenced to life imprisonment without the possibility of parole is not eligible for medical parole, which makes sense.

So those are the two exclusions, but as far as the process goes, it usually starts at the facility with the doctor at the facility that normally handles that particular inmate. And that person would normally be the one to spur the process starting by filing a medical services medical parole request.

And then from that point, it goes through a chain of many people to pull out the necessary information to get it to the people that get to make these determinations. So it starts off with a facility doctor that fills out that initial report that goes to the chief medical officer that then reviews it and either approves it or denies it. 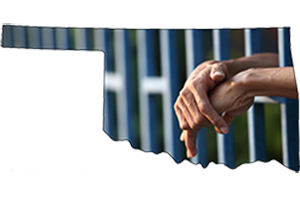 And that is to basically make a recommendation on whether the person is eligible based on the law. That is that they have not been sentenced to life without parole, that they have not been sentenced to death and they need to pull the NCIC background check, a comprehensive background check and attach that as part of it and also put together other evaluations.

And then from that point, it is moved back, and that’s again got to be done within five days and it goes to the facility head or the warden. And then that warden, then once the warden receives it has three business days to write up whether the person is or is not a continued threat to the public.

And then that is forwarded onto the division manager that then has three days to make additional determinations and add to that report. And then it goes to the pardon, I’m sorry, the parole processing unit and their job is to determine what homes are available for the potential inmate.

If parole is granted, where are they going to go? Is there something available? If not, are there halfway programs or something else that might help them out if it’s granted? They make their recommendations on what’s available. They attach it to the report.

It’s only a one-stage process. So they go in, they review the packet that everybody else has come up with and they vote. If at least three of the five vote in favor of the compassionate release, then if it’s a nonviolent offense it’s done.

And then at that point, governor makes a determination either granted or denied. And the factors that they’re looking into is, one, are they eligible by statute, which is pretty easy to determine and, two, are they a danger to the public.

All right. So once somebody is released on compassionate release or on a medical release like that, if there are changes in the inmate’s condition that makes them now that they could be a danger to the public, they’ve gotten better, they’ve recovered, then there could be a revocation of that medical parole. So that is a consideration from that point forward.

But long story short, determining who’s eligible for it, very easy. Going through the complicated process, not as easy. And ultimately there is discretion with the pardon and parole board and the governor if it’s a violent offense.

So if you have somebody that you’re trying to help out looking at, see if this is a possibility, you’re probably going to want legal representation. Certainly you’re going to want an attorney to review it. If you want to talk to somebody at my office, you can go to makelaweasy.com.