Tulsa Attorney BlogOklahoma Courts: How to Save Text Messages for Legal Purposes 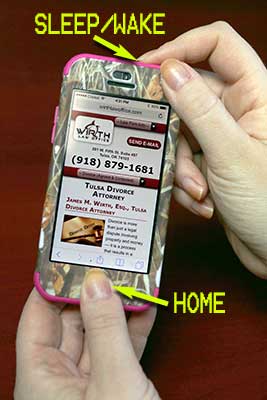 On an iPhone, holding the Sleep and Home buttons at the same time captures the screen contents.

Text messages many times come into play during divorce cases. Criminal convictions have also been obtained based on the contents of text messages. This article discusses some of the challenges related to using mobile phone messages in court, and explores basic ways to save text messages for legal purposes.

Since mobile phone service providers do not reliably save text messages, the best place to recover a text message is most often from a cell phone that sent or received the message. The second best place can be a computer or cloud service where text messages were backed up.

Simply put, if a text message were a person’s only alibi against a capital murder charge, the person might use more reliable – and expensive – methods for saving text messages. Someone involved in a divorce case who needs to prove something a spouse said in a text message might be okay saving the message on their own.

That case raised questions about the authenticity of the messages. A text message is worthless as evidence if there is no proof who sent the message, regardless whose phone was used to send it. However, circumstantial evidence may be adequate proof. The fact that a person was involved in a detailed, heated text exchange about a personal relationship can be a persuasive circumstance.

The Pennsylvania court also found problems related to inadmissible hearsay. Purported facts contained in text messages – such as drug delivery times and dates – might be inadmissible hearsay because they are out-of-court statements offered as proof of a fact. On the other hand, a text message from one spouse to another containing a threat, for example, may be acceptable proof that the other spouse felt threatened – especially if the person who sent the message is available for cross-examination.

In a now famous rape case related to events at an August, 2012 teenage party in Steubenville, Ohio, hundreds of text messages were entered into evidence. In that case police obtained text messages after obtaining warrants to seize suspects’ smart phones. But the New Yorker points out, forensics experts were unable to recover some of some text messages related to that case because newer iPhones can permanently delete text messages.

A word of caution is in order for anyone who thinks they can of send a hateful nasty-gram via text and count on a right of privacy or the temporal nature of SMS message for protection. A Jan. 28 Oklahoma Court of Criminal Appeals decision, State v. Marcum, S-2012-976 (OK App. Ct.), determined a person does not have a reasonable expectation of privacy to the contents of a text message they send. Without an expectation of privacy protecting contents of text messages, police or opposing parties in a civil matter might subpoena cellphone carriers before messages are deleted, or get your messages from a phone that sent or received the messages.

How to Recover and Save Text Messages

Because text messages can be so temporal, the most immediate and effective way to save a text message is to take a picture of the message. Most newer smartphones provide a means of taking screen shots. Each make and model of smartphone tends to have a different method of grabbing s screen capture:

In most cases, screen shots are saved in photo galleries. By emailing a copy of the screenshot to yourself or to your lawyer, you have more certainty the screen-capture image will not be lost.

But what if you need to save a long text conversation that would be cumbersome to capture with screenshots? Again, the methods for accessing stored text messages are as diverse as the selection of smartphones. With iPhones, messages are backed up when the phone is synched with a personal computer. Messages are found inside folders that can be difficult to find.

Once you locate those backups, you’ll need a way to read them. Free tools are available that can access the SQLite database including SQLite broswers such as SQLite Database Browser ‎ or SQLiteStudio. Some skill is required to use those tools.

Simpler approaches are available, but you might have to pay a few dollars. PhoneView for Mac and CopyTrans on Windows machines provide easy ways to find and archive SMS text messages.

Android makes it easier to recover text messages. SMS Backup and Restore is a free app that lets Android users back up messages to a computer, to another phone, to email or to a cloud storage service like DropBox or Google Drive.

It is also worth noting that some cellphone service providers offer online accounts where users may review their text messages. Check with your carrier to find out if you have access to your text messages online.

When to Call a Oklahoma Computer Forensics Expert

Because stored text messages are often not available from mobile carriers’ servers, the veracity of saved text messages can be subject to challenge. In the same way a defendant might deny being the author of a text message prosecutors introduce, opposing parties in a civil or criminal case might argue screen shots or SMS messages a witness brings to court are not authentic.

Courts often accept the sworn testimony of cell phone users who says their own screen shots or stored text messages are accurate renditions of messages they received. However, if there might be significant doubt about the authenticity of a recovered message – or if the stakes are high – it can be a good idea to take the phone to a forensic expert.

Some sources suggest taking the phone to a court reporter to be transcribed, but it would be a tech savvy person could as plausibly plant fake text messages in their own phone as they could fake screenshots or forge recovered messages. A forensic expert might be a costly alternative but would be the most reliable source of testimony.

In cases where text messages contain evidence of a crime that might be relevant in a civil case, it might be worthwhile to provide the phone as evidence to law enforcement. Some – but not all – police agencies have the forensics expertise to verify contents and nature of text messages. Before you hand your smart phone over to a small-town police department, you would do best to contact an Oklahoma attorney for advice.

For a free, confidential consultation with a Tulsa defense attorney or a Tulsa Oklahoma divorce attorney about the potential role of text messages in a civil or criminal matter in Oklahoma courts, contact the Wirth Law Office at (918) 879-1681. You may also ask a question of the Tulsa attorney using the form at the top of this page.