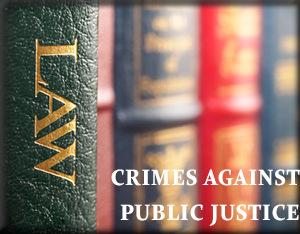 As with other classifications of criminal statutes, crimes against public justice are loosely categorized according to who suffers. These crimes might be grouped in with victimless crimes but stand apart in as much as these crimes, at least in theory, involve impairment of the legal system.

The “other” category includes offenses such as baby swapping (substituting one child for another); barratry (bringing forth groundless lawsuits); fortifying access points to a place where a felony is being committed; and selling land under a false title.

Some archaic Oklahoma crimes against public justice remain on the books, particularly a flag desecration law that was invalidated by Texas v. Johnson, 491 U.S. 397, 1989.

Self-Defense for the Legal System

Because most crimes against public justice involve some form of adversarial or untoward interaction with the legal system, police, prosecutors, and even judges might consider those accused of public justice crimes to be less compliant or more adversarial than others. For this reason, defenses can sometimes involve persuading prosecutors the alleged incident was an isolated occurrence. Contrition and a demonstration of compliant behavior can sometimes mitigate genuinely bad behavior in the eyes of prosecutors.

These can also be crimes prosecutors or police over-zealously charge. A suspect who goes limp and must be dragged to a police car might be wrongly charged with resisting. An otherwise complaint person who repeatedly states objections to an arrest might be wrongly cited for interfering with an officer.

Other offenses against public justice can involve underlying crimes against persons or crimes against property. Accessory to a felony, conspiracy, or participating in a pattern of criminal 0ffenses might involve robbery, theft, or even murder yet, for classification purposes, the harm goes beyond the individual victims or the disregard for a particular law.

Likewise, a falsely reported crime can victimize a person wrongly accused of the crime, but we classify it as a crime against public justice. Society collectively benefits from a criminal justice system informed primarily by honest participants. Offenses against the function of the legal system can thwart its efficient operation.

Yet, protectiveness toward the legal system can be a reason police or prosecutors might forego leniency in alleged offenses against public justice, or even neglect to carefully review alleged facts in view of particular elements of an offense. When they perceive Oklahoma process crimes, they might reflexively defend their turf rather than test their perception.

That is why a criminal defense attorney considers whether alleged acts would satisfy necessary elements of a charge. A defense attorney also considers whether a criminal conviction based on the alleged acts would be constitutional – such as the case of a Houston man whose Texas obstruction charges were overturned by the U.S. Supreme Court because telling officers to “pick on someone my size” is constitutionally protected free speech.

Of course, a defense strategy often involves disputing whether the alleged acts actually occurred. Police might try leverage public justice charges, such as accessory to a felony or conspiracy, in attempts to pry information from someone only remotely connected to a suspect in separate offense, even if there is no good reason for the charge.

Offenses against public justice often occur in the midst of other potentially criminal activities and justice system processes. Some such offenses become the hinge on which revolving door justice turns, such as charges for failure to pay court costs or failure to appear. In these cases, it is important to identify reasons a person did not appear or pay costs. Where persuasive, these reasons can be presented to a court in plea for just consideration.

When you are charged with a crime against public justice, it will not likely be an average Jane or Joe who was victimized and is clamoring for prosecution. It will more likely be police or prosecutors who know the system and know how to work it to their advantage. They usually have no compelling reason to dismiss charges until a Tulsa criminal lawyers demonstrate how and why the charges are flawed. In Oklahoma, process crimes are charges best addressed by a knowledgeable criminal defense attorney.

For a free consultation with a criminal defense lawyer in Tulsa, call Wirth Law Office at 918-879-1681 or send your question via the form at the top of this Web page.